India, despite its respectable number of female goddesses, is not a country known for treating women well. With a spousal abuse rate of two in three married women and the systematic abortion of female foetuses alongside nation-wide corruption,  climbing rape statistics, and the horrifying thousands of dowry murders a year, India is not a safe place for women.  Of course, it was only a matter of time before some women would eventually start meting out sweet, sweet justice.

The Gulabi gang wear the brightest pink saris, carry sticks and liberally dispense justice to wrong-doers – in this case, corrupt officials and abusive spouses. In one case, the Gulabi gang beat up officials who were withholding power from the neighbourhood, demanding special treatment in return for the lights being switched back on. The group is now many thousands strong, with estimates ranging between 270,000 and 400,000  members, lead by resident Bad Ass Samat Pal. Married at the age of 11, she has been the leader of the Gulabi Gang since 1980.

Not very long ago, in a small village in Bundelkhand, where women remain 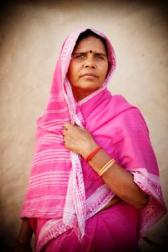 largely illiterate and downtrodden even today, she beat a policeman when he abused her. Some time later, when more power was being cut than supplied to her village, she locked the electricity department officials concerned in a room till they cried for mercy. When she saw a ticket collector asking for bribes on a train, she made such a fuss that he was forced to back off, red faced. – Read more at The Business Standard

And it isn’t only punishing the local wife beater – their reach has extended further and covers a number of social justices:

Al Jazeera reported that the group have an estimated 400,000 members as of 2014; the Hindustan Times put the figure at 270,000. There is no discrimination based on gender because the gang not only focuses on male jurisdiction over women, but also on human rights and male oppression. Community service efforts of the gang include food and grain distribution to villagers in rural areas, pension to widows who do not have the evidence to support their age, and preventing and helping the abuse of women and children. Dowry, dowry beatings, dowry death, rape, child marriages, domestic abuse, desertion, depriving one of an education, child molestation, and sexual harassment are all watched for and punishable by the gang.

Sure, it may seem just outside the bounds of the law, but when the police and government have so comprehensively failed to protect the women of India, is it any surprise that they would take such intensely personal matters into their own hands? They only use the lathi (bamboo stick) when met with force – their main weapon is exposure of the crime in order to shame the abusive man into mending his ways. And any organisation that fights against the hideous practice of child marriage is stellar in my eyes:

I love what they do, and admire them greatly for their bravery and iron will. It is sad that it should come to this, but nonetheless it makes me glad to see the fire of women all around the world.