Right now, South Africa is back in the news for the horrific gang rape and murder of Anene Booysens, and the shooting of Reeva Steenkamp by her more-than-likely-guilty superstar boyfriend Oscar Pistorius. We live in a society that not only tolerates violence against women, but implicitly encourages it through low prosecution, apathy and a president who is a polygamist, that refuge of misogynists the world over. Waiting for society to change, or for every single man to learn to respect women and our integrity, is a waste of time. I believe that women must take our future and safety into our own hands. No doubt, there are many men out there who support our cause, who believe in the inviolable rights a woman has to safety and protection.

Part of each woman’s journey is to become stronger and more confident – not just physically, but mentally and emotionally too. Regardless of where you live, whether in the safest or most dangerous country in the world, it can only be a good thing to find different ways to challenge yourself each day. We all face difficulties based on our gender, whether it is in the workplace, home or streets. It is my humble opinion that martial arts holds many of the answers, but I must throw in a disclaimer: all of this depends on you, the dojo you choose and the amount of time you’re willing to sink into it. This isn’t a quick fix, but it is a step (and a kick) in the right direction. (Think the dojo might be dodgy? Check out these signs of a McDojo!)

1. You’ll Get Stronger in More Ways than You Thought Possible

The first ten punches will be your worst, and your first 100 kata will be your ugliest, but you’ll learn quickly. While no decent martial arts emphasises strength in a technique, all of them encourage a body capable of working quickly, and working hard. Goju Ryu, for example, emphasises the idea of the iron body, a body that is conditioned and strong. Aikido encourages flexibility and grace, but you’ll also need to be able to take a fall. And you’ll be bruised for the first few months (and I still get bruised years later) but you’ll also realise that being punched really isn’t the worst thing that can happen to you.

EDIT: I’d like to add in the emotional growth that comes with training. It requires a great deal of humility to grow as an artist, to learn to accept hard truths, and to be able to understand that the teaching nearly always comes from a place of love (even if it looks like frustration). When I first started training, I honestly used to cry a lot. Never when anyone could see, but I used to be genuinely devastated by my failures, and it felt like every class was a failure. But you know, I’m still here, and now instead of getting upset, I just get better.

But, it is acceptable to cry when you do good too. A woman who has the bravery to show her joy and her pain is a fine warrior indeed.

2. Because its the only unisex sport in the world

Every other sport encourages separation in training – soccer, cricket, hockey, basketball, you name it. But in the dojo, you will have to train with men (or boys) and get used to the disparity in strength. Not to say that you can’t match it some day, but most women are unaware of the strength difference is, and don’t know how to compensate for it. And once you understand it, you can compensate for it with other things. Learning to outsmart and outlever someone is one of the fundamental principles of most martial arts – to not meet someone with force, but to dissipate it and send it harmlessly on its way. There are some women-only dojos or classes, which have their place for beginners who may be a little (or a lot) scared. But I would recommend nothing more than a little girl learning to train with boys from the beginning so that she does not learn fear, and learns to work with her body’s strengths as early as possible.

3. Because Discipline is Sexy

A great deal of the martial way involves small details that seem insignificant in the scheme of things, but have a huge impact on your mental grooming and habit-forming. Martial arts require concentration, silence, etiquette and meticulous grooming. You’ll be in close contact with others – everything from long nails and earrings to body odour  and athlete’s foot matters now. Don’t be that skanky person no one wants to train with for fear of getting a talon in their eye and a whiff of day-old perfume. Nobody wants that. Oh, and you’ll need to be punctual – being late is often met with some tasty push-ups. And of course you should be on time. Being late is pretty disrespectful of the Sensei’s time. Take these lessons with you into everyday life (amongst all the others you’ll learn) and you’ll find other things start to get easier.

4. You Need To Get Out of Your Comfort Zone 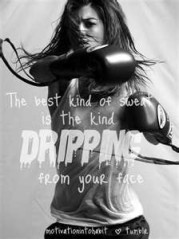 Unlike most Western situations, martial arts usually requires a mindset unfamiliar to most of us: it is one that requires the ability to take instruction, criticism and to publicly demonstrate your understanding. Think public speaking is bad? Try performing a kata in front of a panel of Sensei and a hundred-odd students. You can’t start over, and you can’t stop and correct yourself without it being painfully obvious. And then there will be times you’ll be in pain, and you’ll be scared, and you’ll feel like a failure. And you need this, because how else will you grow? But don’t worry, you won’t be doing it alone because…

I started Goju Ryu and Aikido in 2006. I am still friends with the people I started training with then, and most of my uni friends come from the dojo. Now, I train with a motley crew of kids, adults and teens, all of which contribute to my growth as a person, as a karate-ka. These are people I see two or three times a week (sometimes four, even), which is more often than I see the vast majority of my family. A good dojo will become a new family, another support network.

Also, if it hadn’t been for that special Rhodes Dojo, I might never have met my Handsome Physicist. So there’s that.

You think you’re just a tiny creature, bound together by chick lit and an unholy love of noodles? You might discover that you can understand the flow of techniques and produce the kind of kata that makes ancient Sensei weep for its beauty. Think you’re clumsy off the mat, never to be redeemed? You might be a fierce and clever fighter that makes bulky men shake in their boots. There are so many aspects to the martial arts that everyone can find something to be good at. For me, its martial history. Who knows what you will find? 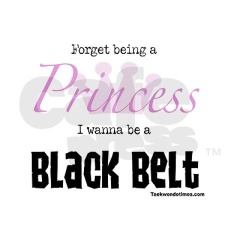 In South Africa, there’s this particularly huge gap between the number of male and female practitioners. I would confidently say that its about 70% male (and that’s being generous: more women leave the older they get.) The ratio changes from country to country, but many a visiting Sensei has commented on the lack of women in the dojos here. The reasons are plenty – women are expected to give up their hobbies when kids/career beckons, women tend to be intimidated, we’re raised to do ballet (ugh) instead. But really, why is this something we should be giving up? Goju Ryu itself owes part  of its roots to Fang Chi Liang, who developed the famous White Crane style. Dog Kung-Fu (Góuquán) was supposedly created by Buddhist nuns. There has always been a place for women in martial arts, and we have every right to contribute to its history, preservation and growth.

8.  You’ll Learn (and Defeat) Your Limitations

I’ve mentioned before the viability of martial arts as a system of self-defence, but to summarise that post here: it’ll be a great system, but only if you’re willing to train for years. Even then, it isn’t any guarantee that it’ll save your life. You’ll never learn to dodge bullets or kick a gun out of someone’s hands (and if anyone teaches you this, you need to change dojos immediately). But what you will learn is how far your strength and courage will take you. You will quickly understand that the human body is as adept at breaking itself as it is at damaging others. And like I said before, there will be times you’ll be pushed so far out of your comfort zone that you’ll want a meteorite to crash through the ceiling and kill you. (If you’d like to know what that’s like, then read this post.) Initially, you’ll be weak and terrified, bruised and ignorant. There’s so much to learn, and so much to carve for yourself. But it will be absolutely worth it.

Every single martial artist takes a different journey to get where they are, but it helps to know where you want to go. If you want to learn to live without fear, to be mentally and physically strong, to understand your body and spirit and to train alongside others who share this incredible journey with you, then I can recommend nothing better than a great dojo with a great Sensei. Stick it out, and when it clicks, you’ll have something to enjoy for the rest of your life. 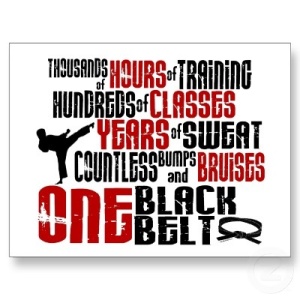