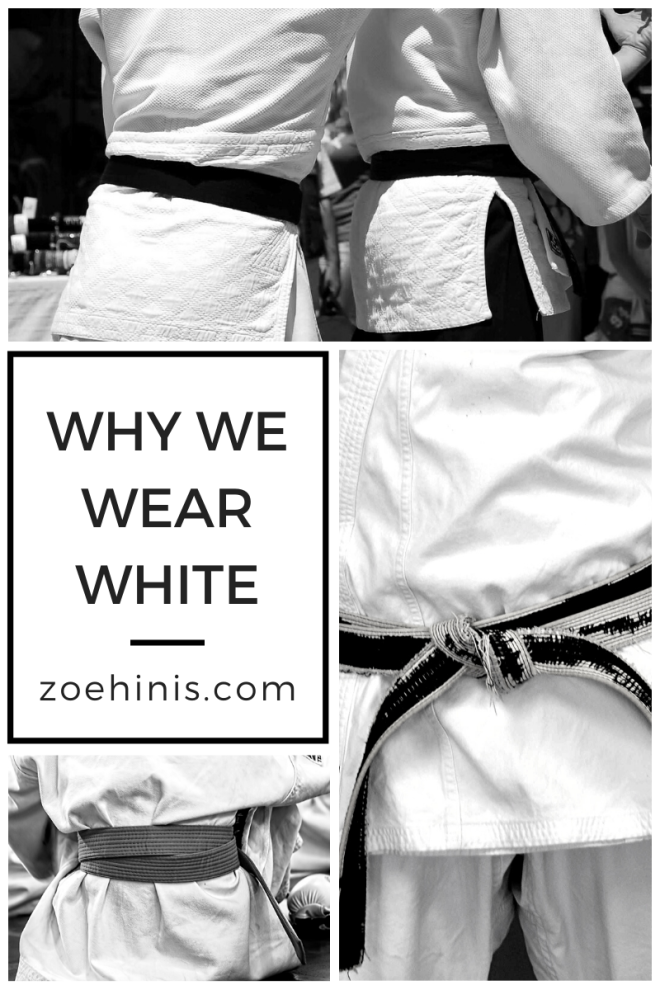 It is the bane of every dojo parent’s existence – the white karate suit. Why dress children in white? Of all the colours, why choose the most unforgiving, most difficult to maintain, most revealing colour of all? Why something that will get dirty 20 minutes before a grading?

I get it, I do. And after all these years, I still get annoyed when something stains my precious Shureido gi. I save up for literal years to buy each one, and then my toddler son comes up from behind me with sticky hands and leaves stains on the hem of my jacket. It is in those moments that I wish I trained in a practical black gi. Luckily, I have a special care guide for maintaining the quality of my suits – you can read it here.

But the white keikogi (gi for short) is a relatively new phenomenon, instituted by Kanō Jigorō, founder of Judo. He adapted it from kimono around the turn of the 20th century. Japanese martial arts historian Dave Lowry speculates Kanō derived the uniform’s design from the uniforms of Japanese firefighters’ heavy hemp jackets, hanten (半纏). In the 1920s, to help market karate in Japan, Shotokan founder Gichin Funakoshi adapted Kano’s design and introduced it to karate. The gi is not that ancient and mystic – it is only around 100 years old. For context, Wimbledon has been played since 1877.

While the length of the sleeves and pants are different from style to style, the overall look is that of a white jacket that folds over itself, a belt, and pants. (And a shirt underneath for women, which sucks in the summer but is a bonus in the winter.) The gi ensures that everyone is dressed the same, that issues of class and income are somewhat equalised. It also allows for the rank system, since the only way to stand out is to excel. We see this same principle in school uniforms and blazers. (At my high school, we used to call overachievers Christmas trees, because their blazers would be laden with shiny badges and braiding). When Chojun Miyagi started teaching, everyone wore whatever they could. Mostly, their work clothes. Okinawa was desperately poor after the Second World War, and students made do with what they could find. Sensei Teruo Chinen Sensei writes in his biography about his first gi:

“Because I could not afford a new uniform, my first karate gi was tailored by my oldest sister, Shigeko…I borrowed my friend’s commercially-made gi and my sister copied it. Shigeko collected flour sacks donated by the US Red Cross. She reversed the sacks so the printed part was inside. She used a Singer treadle sewing machine and tailored the top, bottom and belt. That was great!” Forty Years of Chamber, Teruo Chinen.

But why white? Especially since Judo has got blue suits, and some of the weapons-based styles (Iado, Kendo) wear black. (The black is to prevent staining from some of the oils used in maintaining weapons.) Why not adopt something more practical? Here we must delve into Japanese culture, which is deeply concerned with matters of hygiene. I always knew about this, but I only really understood the depth of it when I visited Japan and Okinawa and saw how the Japanese prize hygiene and cleanliness. From the absence of litter to the lack of body odour on a crowded train, the Japanese do not tolerate breaches of hygiene. It is why shoes are left at the door, people wear face masks when sick, and the toilets are the most magical monuments to personal cleanliness (my kingdom for my own TOTO washlet!)

And so we come to the white gi, all the easier to see dirt with. But a white gi is more than just a symbol of humility – it shows us the seriousness of the practitioner. The condition of the gi is a reflection of the state of the martial artist’s mind. It should be spotlessly clean, and mended as necessary. The belt is properly tied and the ends are the exact same length. Preferably, there is only a federation badge, and maybe some subtle embroidery of the name. The white gi is simple, humble and pure. It should reflect these qualities in the practitioner.

Of course, this doesn’t take into account the general rambunctious nature of children and their ability to get grass stains on a newly laundered gi, but it is also important to remember that Japanese children are held to the same high standards as adults. Japanese children are expected to keep their own schools clean, instead of janitors, unlike Western children. They are raised to take better care of their environments, and one might assume that this same attention to detail applies to their karate uniform as well.

And finally, and the best reason I’ve found for wearing white – it shows up blood immediately. For the same reason nurses started wearing white in the 1900s, we wear white in the dojo so that blood stands out and injuries can be immediately attended to. Overall, I feel like this is the best reason, but I also like the philosophical reasons as well.

And this is where opinions start to differ. I cannot take anyone seriously when their suit looks like a Nascar racer. It’s like those chops who cover their cars in stickers saying “Ass or grass – no free rides!” and “no fat chicks!” Thanks for the heads up – now we know how insecure you are. It’s the bro version of a karate suit, the Cobra Kai sleeveless black gi. (Although, I admittedly love the new Cobra Kai series far more than the original Karate Kid movies). A gi covered in patches looks untidy and kitsch, and that’s before we even start on American flag suits, or camouflage belts.

A uniform can command respect: Florence Nightingale realised this, and introduced uniforms for her nurses, which also included “colored bands that indicated their level of experience; pastel colors for young nurses, black bands for senior nurses.” A gi, well cared for and proudly worn, can command respect, and it is the instructor’s first impression when meeting possible new students. Let the gi speak for itself, and let your karate speak for you.

It doesn’t have to be an expensive gi – heaven knows there are plenty of rank amateurs wearing monstrously overpriced suits, while some of the best practitioners are wearing second-hand suits that they have meticulously repaired and cleaned. I’m not impressed by an Arawaza gi when some tedious boor is wearing it. A gi can hide your gut, but it can’t hide a bad attitude, and it especially can’t turn a MacDojo black belt into a real one.

One thought on “Why we wear white”