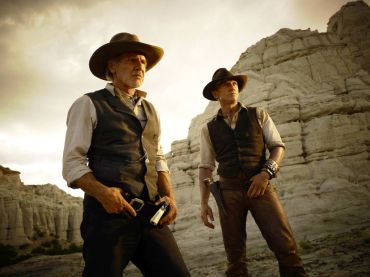 Far be it from me to piss on the writing parade of someone who likes to scribble cowboy fiction. After all, I suppose it has its place, much like bric-a-brac in the glorious, universe-spanning world of literature. While undoubtedly a genre that pretty much reinforces every heterosexual norm you can think of (the manly man that provides manly protection for his lone bride wasting away on the farm and too lady-like to fight the bison etc), it bakes someone’s cake. And I suppose there is the chance that it can be an intellectual, egalitarian, tasteful discussion of body politics, cattle and sex. A tiny chance, but a chance nonetheless.

Gaze upon the entry conditions for this cowboy anthology, and when you’re done, come back here and laugh with me.

And cry a little.

You see, I find these kind of anthologies more than just mildly offensive. Look at this clause:

Material that includes the following will be summarily rejected:

What does that even mean, ‘forced seduction’? Is this just another way of writing non-con? I don’t think its possible to tastefully handle ‘dubious consent’, that euphemism for rape. Rape is inherently distasteful, and to try write it as ‘they actually are really into each other, she just doesn’t know it, the bint’ is as offensive as it is misguided. And how do vampires not count? They’re undead, is anyone fooled by this? (And why are there vampires in a cowboy story? Isn’t that the worst combination of genres ever?) And sentient animals are somehow not animals, so it’s fine to hump them? (Stephenie Meyer, I blame you for this shit.) My cats are pretty sentient, able to make decisions and unlock doors and manipulate humans. I guess that means it’s okay to sex them up.

And add to it this shamefully sexist tripe:

Their rugged masculinity make us feel attractive, protected, womanly and pursued. They are the perfect antidote to the glut of androgynous and metrosexual men the media is saturated with. Sun-bronzed skin stretched taught over work-hardened muscles, and the soft sound of a deep Texan drawl, is enough to quieten the wildest of women.

‘Quieten the wildest of women’. I see. I wasn’t aware that we were meant to offended by men who have better things to do than beat up animals, bench-press and belch. A man who dresses well, takes the time to groom himself and who doesn’t want to go camping is definitely an upgrade on the ultra-boring Camel Man as described above (and so perfect for a smoking ad! Don Draper would be proud.) But maybe I’m just a crazy person. Millions of Shades-reading women can’t be wrong (oh but I think they are.)

My point is (and I always have one) is that this is an anthology for women written by women, and it encourages the same kind of tedious, negative crap that we should have grown out of reading round about the 1930s. We shouldn’t be encouraging anything that allows for tasteful descriptions of rape, or reinforces outdated norms of sexuality. This is 2013, a grand new millennium that is looking away from this kind of backwards thinking and towards a world with (hopefully) better literature. If we’re ever going to have anything tasteful to read, there has to be some kind of backlash against this kind of unmitigated drivel. If I am that lone person, fine, I can deal with that. Someone has to stand against the tanks of shitty literature.