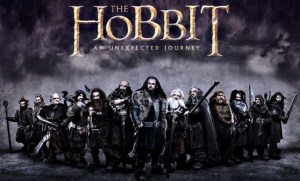 So, I was fortunate enough to get a preview ticket to see The Hobbit in very sexy HFR 3D. This luxurious new 3D format actually delivers what it promises: increased depth (which sometimes creates a weird soap opera feel) and no more blurriness. Thankfully, it is also much, much easier on the eyes. I was pleased that I didn’t have a headache after nearly three hours of 3D. For that alone, the new format is worth your time, especially for epic battle scenes.

Now, onto the movie itself. I read The Hobbit a long time ago, like most people, and haven’t reread it since for a number of reasons. Mostly because a) I very rarely reread books when there’s so much out there that should be read and b) I find fantasy the most boring genre in the world. So, the movie should ideally be a distillation of the best parts of the book to encourage people to explore the book further while making the movie a manageable, digestible experience.

Does the movie deliver? The action scenes are sublime in their direction and excitement. The post-production clearly cost a great number of millions. Gollum made an excellent appearance and his facial rendering now severely dates the Lord of the Rings trilogy in comparison. Martin Freeman, while a bit stilted initially, (basically Watson with no shoes on) still makes a great action hero. The dwarfs are fun, and of course Gandalf can save the movie by himself. The art direction is outstanding, the clothes are most beautiful. Taken on the value of those things, the movie is worth watching just for how it looks.

But you knew that I was going to find something, and I hear the nitpick train coming into the station. The Hobbit is a product of the 50s, and it is going to be inherently problematic. Like Game of Thrones, it too is about a bunch of white men running around having adventures. (Thankfully, less rapey, gratuitious sex.) There is ONE speaking role for a woman in three hours. She mostly glides around like a lost bride and doesn’t really inspire much awe or even interest. As you can imagine, everyone is pretty much lily-white. Men are brave and manly and smoke a lot. It could have been mistaken for a tobacco ad, at times. I don’t see how problematic it would have been to have the dwarves being of different skin colours. (But you only have to look at the backlash about Hunger Games having a few black actors to see where the problem comes in).

So, that’s the BA part of me speaking up. Now for the writer part. Dear god, did this one average-sized book have to be split into three movies? There’s still too much walking. There are goddamn musical numbers, which should have been left in the book. They were as trite and folksy as they were in the 50s; they have no right being in a movie now. (Also, sometimes sound editing dropped the ball and the lyrics weren’t very clear.) They jar with the whole movie and should really have been left out. There’s a lot of scenes that could have been left out to make a more coherent, interesting whole. Peter Jackson, like James Cameron, is dragging the viewer into his special circle-jerk. Sure, I can imagine the hardcore fans appreciate the thousands of details in Orc costumes that are only on screen for a few minutes. But what about those of us who want a better version of the books? With less walking and tedious descriptions and complicated family trees that make reading the books like chewing concrete?

My opinion of The Lord of the Rings trilogy has always been an unpopular one, but I stand by it. And unfortunately, the problematic things about the books have made their way into the films, the one chance the books had to get better. The movies are interminably long, as are the books. More writing is not necessarily good writing. Just because I want cheesecake, it does not mean I want to eat one the size of a dustbin lid. The racism and elision of women could have been addressed. After all, the idea of some races being better or smarter qua race is at the very foundation of this. Hobbits are lazy, Elves are smart, Dwaves are drunken and strong, etc.

The best example of a canon evolving is Sherlock Holmes. Sherlock Holmes the character (as written by Sir Arthur Conan Doyle in the 1880s) was a racist, misogynist asshole, for all of his smartness. But the two most recent iterations of this phenomenon have changed Holmes for the better. BBC’s Sherlock has kept the asshole tendencies but at least he isn’t hardcore racist. I’m ambivalent on the sexism issue.

Guy Ritchie’s Sherlock Holmes works with women and has lost the general dickishness of the character as developed in the 1960s and onwards. I don’t think this has harmed the character: if people can change and grow, why can’t characters?

The inherent problem with Lord of the Rings and the Hobbit is that it has one of the most puritanical fanbases (just like Jane Austen fans). They don’t like change, and they don’t like upgrades. Surely the core message can survive a little updating? Ultimately, the books are about being good, doing good and being brave regardless of size or strength. What difference does it really make if Sam had been a female hobbit? Or black? And if Tolkien couldn’t have done it then, surely Jackson could have done it now? If the characters are really defined by their personalities, there’s no reason race or gender could be an issue. Unfortunately, it is still edgy to to have a female lead. Or a gay one. Or a black one.

Alright, so segue aside, do you need to see the movie? If you can see it in HFR 3D (the Nu-Metro rep said that only four screens will have it nationally), then go see it just to enjoy the new tech and experience. If you’re a Hobbit/Lord of the Rings/fantasy fan, nothing I say here will dissuade you. The problems I have are not the ones everyone else will have. It is the holidays, and it isn’t the worst movie you will ever watch (because that movie is Sex and the City).

Read what others thought here:

Butter Scraped Over Too Much Bread: Robbie Collins

Variety.com – No kinder on small bladders or impressionable eyes

The Trilogy Will Test the Stamina of Non-Believers: The Guardian.co.uk

Misty Mountain Out of a Molehill – The Daily Mail

One thought on “The Hobbit HFR 3D Review”