Censorship says more about the people that ban the books than the authors that wrote them. According to the American Library Association, challenges are recorded and tallied, and they have provided us with a fascinating list of the top ten books that have been removed from libraries over the last ten years. While many of the titles are perenially banned and unbanned (Huckleberry Finn, The Colour Purple, The Catcher in The Rye) I am always surprised at which books do get labelled as foul and disgusting and all sorts of colourful pejoratives.

Amongst these titles, there some I would censure only for their terrible writing, 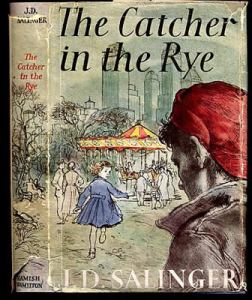 The Catcher in the Rye by JD Salinger

like Twilight and Gossip Girl, but I wouldn’t demand they be pulled from shelves. I don’t think that all young girls will look to the main female characters in such books and think “I wish I could be vapid and loved only for how I look!”, and I know many sensible and clever teens who see Twilight for what it is, and isn’t. What it definitely isn’t is subversive. As I have mentioned before, it is so dreadfully, boringly mainstream. How it gets lumped in the same category as Catcher in the Rye escapes me. As far as subversive goes, I’d rather push for Fight Club (actually, anything by Paulahniuk).

Of course, some books will get banned just because they aren’t white enough, not complying to the status quo of ‘white people know and do best’: worth noting in this category are titles like Beloved (One of my personal top 10 favourites) and I Know Why The Caged Bird Sings.  I am surprised that Salman Rushdie’s The Satanic Verses isn’t on that list, though I still believe it is his finest work and one of the best ever produced for its vast storytelling ability and brilliant handling of issues so mutli-faceted as to resemble a prism in a sunburst. Unfortunately, too many people think its evil and anti-Islam, an argument that is as specious as it is insulting. And, sadly, always offered by people who haven’t read the book. But I take hope in the fact that books by leading atheists and scientists are not on that list either. To be fair though, the ALA offers this disclaimer:

A challenge is defined as a formal, written complaint, filed with a library or school requesting that materials be removed because of content or appropriateness. The number of challenges reflects only incidents reported. We estimate that for every reported challenge, four or five remain unreported. Therefore, we do not claim comprehensiveness in recording challenges.

I suspect this is why a great deal of truly controversial books are not on their list.

I still believe in students, especially this one, who is running an illegal library out of her locker to counter the draconian rules of her school. (If she were my daughter, I would consider myself the most successful parent possible.) I truly believe that there are so many kids out there desperate for knowledge and stories, and as long as ill-informed teachers and librarians hide away great books, they will not have access to literature that challenges the status quo. I have always believed in the power of books to change and grow minds, and books have always been my teachers. And sometimes banning a book does great things for its power. Consider the popularity of Germaine Greer’s wonderful Female Eunuch, a book so infamous in its heyday that women had to buy it in brown paper bags under the counter. (That was 1970. Really not that long ago, when you think about it.)

Unfortunately not everyone can get around bans, so I would prefer they didn’t happen. And it could be said that books like Mein Kampf should be banned lest they influence further evil, but by being able to analyse what motivated such a crazy, evil man, we might better understand what caused his rise and rise. Also, once we start banning two or three books, it isn’t long before anything remotely objectionable gets banned. Sitting on this side of dead apartheid, book banning has a particularly ugly (and darkly amusing) history here. Considering  it was a system so ridiculous as to ban Black Beauty based on the title as well as the delightful Monty Python’s Life of Brian, it is a neat insight into some the things the apartheid government feared most: black people and religious irreverence. And perhaps really big horses.