There’s nothing writers love more than giving each other advice.

It is the most irritating thing short of catching ebola from a tax form.

But there are hundreds and hundreds of blogs dedicated to writing about writing, because it doesn’t get more tediously meta than writing about writing about writing. Maybe this is why some writers have to work so hard to keep friends around. And most of the writers giving advice haven’t even published so much as a pamphlet, but since opinions are as plentiful as assholes, its a little difficult to get away from. This is the reason why I don’t actually want to hang around writers. (But I have hung out with some pretty cool authors.)

Now, if I want advice on writing, I want it from Neil Gaiman, Lauren Beukes or Toni Morrison or Chuck Paulahnuik. And I do seek it, please believe my pretty white gi. And from what I gather, the only advice is practise and read more. That’s all there really is to it. Everyone wants a great novel and everyone wants to be JK Rowling but no one wants to put in the legwork. Great authors are well-read authors, and have been writing non-stop for years. Whenever people casually say ‘oh, I thought I’d write a novel, but its like really hard and stuff’, it usually turns out they’ve never written out more than a cheque before. Of course its fsking hard. All I’ve managed is 6 of the damn things and I’m 25. Compared to Stephen King or even Barbara Cartland, it is a pitiful output. Nowhere near enough, and definitely not good enough.

So in the run-up to Nanowrimo, there will be hundreds of blogs dutifully telling other writers what to do. And it is nearly always people who have no idea what they’re doing. Stupid advice about writing schedules, or not having a schedule, or writing in the morning or on the train. Its never a straightforward “write until you get sick of it. And then write some more. And read more great books by real authors. And then write some more.”  The whole joy of writing for me is that it is such a solitary joy and that it is the one thing that (to a large extent) doesn’t rely on anyone else. Toni Morrison said in an interview that she writes books that she wants to read. Isn’t that part of the point? Since when did we need consultants and talent brokers? 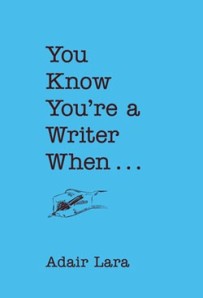 Of course there are great articles that are interesting and give good advice, but isn’t the one thing writers hate most is advice? I have a book called You Know You’re A Writer When…By Laura Adair, and one of the signs is “when a friend timidly suggests that maybe the umbrella scene isn’t necessary, you find you don’t like that friend so much anymore.” Its true and no one wants to admit it, but no writer actually likes being corrected. We admit it is necessary, and we know that we sometimes have to do what our publishers want but no writer actually enjoys it. (For better insight into the writer-publisher relationship, read He Beats Me, But He’s My Publisher over at Mad Genius Club).

So yes, in the Nanowrimo frenzy, amongst the joys and horrors of trying to make wordcount between work, training and the Handsome Physicist, the last thing I know I want to hear is “oh, you’re doing it wrong. Don’t you know you’re supposed to write naked?”