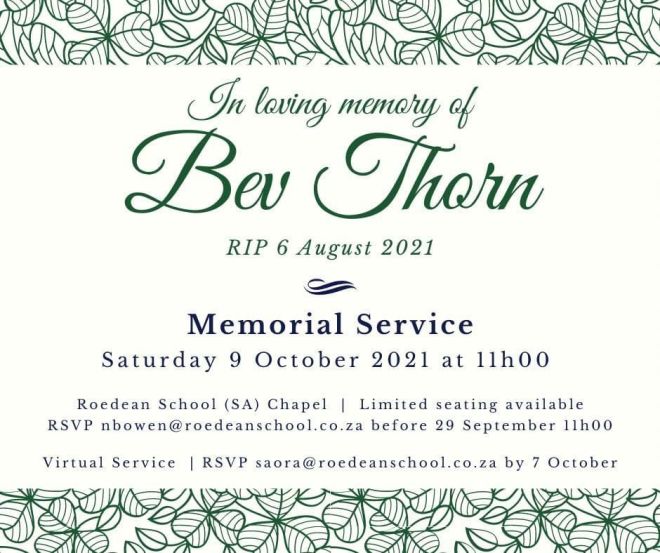 It’s not really cool, or bad-ass, to cry for a teacher who last marked your tests nearly 20 years ago. But I just found out that Bev Thorn passed away in August (shows how much I keep up with school news) and now I find myself having more than just a bit of a cry.

She was that special breed of teacher – strict, unrelenting in her standards. Lived like a Franciscan church mouse. Colour-coordinated her shoes, belt and hairband. (God, we were so awful, we always made fun of her for it. Teenage girls can be such little monsters.) She wore only primary colours, and smoked like it was an episode of Mad Men. Her classroom always had a faint nicotine smell, which even the wisteria couldn’t mask. She was obsessively punctual, and expected the same of us, to respect time as she did. If you were late, you’d arrive to a locked door, and would then receive a lecture about learning to be on time. She could not abide clicking pens, and would chuck them from her second-storey window and down into the agapanthus bushes. (I can’t imagine how she felt about mobile phones in the last few years; she must have hated them so much.) She taught us to always take off a layer when we came in, so that we could put something on when we left and we’d feel warmer. I still do this, 22 years later. If you asked about the meaning of a word, she would immediately direct you to find it for yourself in one of her many dictionaries. She taught us to google before Google.

She lent me books from her personal stash, something I would personally be loathe to do, because I know how people steal books. I remember reading a historical novel about Napoleon, and it had some rather steamy scenes, but she didn’t let that stop her from sharing it. She never, ever rolled her eyes because I had put my hand up (again, and again and again), and always knew when to take me aside and ask if I was okay. She only ever despaired at my abysmal handwriting (which finally got better when I started hand-lettering karate certificates – I’m sorry she never got to see it). But she set alight in me an undying love for history, which I continued through to matric, and then into university as my major, alongside English. In this fundamental way, she helped mould who I am today. She always delighted in my questions, my curiosity, and never made me feel like a dork, or an unlovable nerd.

Of course I thought she would live forever. Teachers are supposed to. Teachers and sensei and parents are just not meant to die. I thought Madam Thorn (all our teachers were called madam) would live on and on, and continue to be there for every Founders Day, and at the annual market, kept alive by the roses and the tea and crustless sandwiches.

I am immensely grateful that I had a teacher of her calibre, (and more, who I will now email instead of putting it off), whose passion for history lives on in so many students. She must have taught thousands over her long career – I am sure that many are feeling as I am now. Sir Terry Pratchett wrote that no one is truly gone while their name is still spoken; I hope this little blog post keeps her name going.

Rest in peace, Ms. Thorn. I still plan to become a historian, though a martial arts one (sorry). Hopefully the best female martial historian – I hope that will make you smile, wherever you are. Thank you, for all you did for an enthusiastic nerd in an oversized pinafore and ugly brown shoes, and all the others like me.